skip to main | skip to sidebar

Jamie was over at the high school yesterday checking things out, and there is still no power. The word going around town is that classes are going to resume on Wednesday, and Jamie has a meeting at the school on Monday morning. So, I assume they've either gotten it fixed or it will be fixed by Monday. He's relieved that school will resume next week, because district play begins for football this coming Friday, September 26. He is still not sure if there will be any power to the stadium, so they may have to play on Saturday afternoon if the lights aren't working. Either way, we're thankful that the season will go on! For a while, we really weren't sure if other teams in our district were going to be able to get back to school and play their games. I think Jamie is going a little bit crazy with this long break in the football season. Having more than week off in the middle of football season is simply unheard of. It's been really weird.

We finally went grocery shopping today, and the shelves are mostly restocked. I've tried to go to the store 2 other times this past week, and they've either been out of everything or closed by the time I got there. We are still under a curfew from dusk till dawn, so most businesses are closing early. It's been a slightly frustrating experience. Still, I have to keep in mind that we are lucky to have electricity right now - that really helps to keep things into perspective. We made a really big haul at the store today, so our fridge is full again. It's a good feeling.

My building at work has been closed for the past week, so we've been relocated to temporary cubicles in another building on campus. That has also been frustrating since a huge part of our job is reliant on our files, which are back in the other building that we cannot access. On top of that, my work laptop was locked up inside the building as well, and I wasn't able to retrieve it until Wednesday. It made for a pretty interesting day at the office on Tuesday - no computers, no files, and no phones! We will be allowed back into our building and our usual workspaces on Monday. I'm unsure of what we will find when we get there. From what one coworker told me who was in the building last week, there is a lot of water damage. Quite a few of his files were wet. I assume they've addressed those issues if we are being allowed back in the building.

We still have storm debris lining the streets of Friendswood. Greenbriar is particularly bad - you can't even fit 2 cars down the road at the same time. Here is the huge pile sitting outside of our neighbor's house: 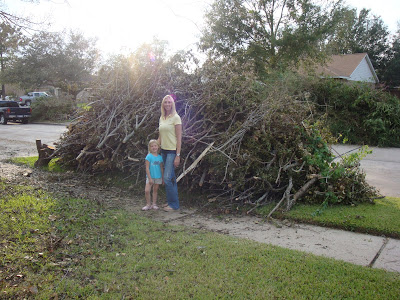 As you can see, it's taller than me! We were outside chatting with the neighbor yesterday, and he said that he is hearing that it could be up to 3 months until the city is able to pick up all the trash. I really hope that isn't true! It's making me sad to see our nice little city so trashed with all these piles of limbs, broken fences, and other debris. Still, I understand that it is a huge job to dispose of all of this junk, so I'm reminding myself to be patient and thankful for all the workers who are undoubtedly working major overtime right now to get things cleaned and power restored.

Melanie
I am a happily married working mom. I'm also a coach's wife and I LOVE it! Life gets crazy all the time, but I wouldn't have it any other way.

What I talk about